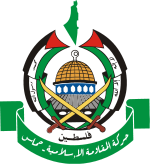 The Covenant of the Islamic Resistance Movement (Hamas)
18 August 1988

In The Name Of The Most Merciful Allah

"Ye are the best nation that hath been raised up unto mankind: ye command that which
is just, and ye forbid that which is unjust, and ye believe in Allah. And if they who have
received the scriptures had believed, it had surely been the better for them: there are
believers among them, but the greater part of them are transgressors. They shall not hurt
you, unless with a slight hurt; and if they fight against you, they shall turn their backs to
you, and they shall not be helped. They are smitten with vileness wheresoever they are
found; unless they obtain security by entering into a treaty with Allah, and a treaty with
men; and they draw on themselves indignation from Allah, and they are afflicted with
poverty. This they suffer, because they disbelieved the signs of Allah, and slew the
prophets unjustly; this, because they were rebellious, and transgressed." (Al-Imran -
verses 109-111).

Israel will exist and will continue to exist until Islam will obliterate it, just as it
obliterated others before it(The Martyr, Imam Hassan al-Banna, of blessed memory).

"The Islamic world is on fire. Each of us should pour some water, no matter how little,
to extinguish whatever one can without waiting for the others." (Sheikh Amjad al-
Zahawi, of blessed memory).

In The Name Of The Most Merciful Allah

Introduction
Praise be unto Allah, to whom we resort for help, and whose forgiveness, guidance and
support we seek; Allah bless the Prophet and grant him salvation, his companions and
supporters, and to those who carried out his message and adopted his laws - everlasting
prayers and salvation as long as the earth and heaven will last. Hereafter:

O People:
Out of the midst of troubles and the sea of suffering, out of the palpitations of faithful
hearts and cleansed arms; out of the sense of duty, and in response to Allah's command,
the call has gone out rallying people together and making them follow the ways of
Allah, leading them to have determined will in order to fulfill their role in life, to
overcome all obstacles, and surmount the difficulties on the way. Constant preparation
has continued and so has the readiness to sacrifice life and all that is precious for the
sake of Allah.

Thus it was that the nucleus (of the movement) was formed and started to pave its way
through the tempestuous sea of hopes and expectations, of wishes and yearnings, of
troubles and obstacles, of pain and challenges, both inside and outside.

When the idea was ripe, the seed grew and the plant struck root in the soil of reality,
away from passing emotions, and hateful haste. The Islamic Resistance Movement
emerged to carry out its role through striving for the sake of its Creator, its arms
intertwined with those of all the fighters for the liberation of Palestine. The spirits of its
fighters meet with the spirits of all the fighters who have sacrificed their lives on the
soil of Palestine, ever since it was conquered by the companions of the Prophet, Allah
bless him and grant him salvation, and until this day.

This Covenant of the Islamic Resistance Movement (HAMAS), clarifies its picture,
reveals its identity, outlines its stand, explains its aims, speaks about its hopes, and calls
for its support, adoption and joining its ranks. Our struggle against the Jews is very
great and very serious. It needs all sincere efforts. It is a step that inevitably should be
followed by other steps. The Movement is but one squadron that should be supported by
more and more squadrons from this vast Arab and Islamic world, until the enemy is
vanquished and Allah's victory is realised.

Thus we see them coming on the horizon "and you shall learn about it hereafter" "Allah
hath written, Verily I will prevail, and my apostles: for Allah is strong and mighty."
(The Dispute - verse 21).

"Say to them, This is my way: I invite you to Allah, by an evident demonstration; both I
and he who followeth me; and, praise be unto Allah! I am not an idolator." (Joseph -
verse 107).

Gaspatcho by Francesco Gasparetti is licensed under a Creative Commons Attribuzione-Non commerciale-Non opere derivate 2.5 Italia License.
Based on a work at http:/gaspatcho.blogspot.com.